Gojko Adzic is an award-winning international speaker, consultant, and writer. One of the most influential personalities in the Agile Testing world, Gojko wrote renowned books such as “Impact mapping”, “Specification by Example” and, most recently, “Humans VS Computers”. Over to Gojko now, enjoy this interview!

Avanscoperta: How did you start being interested into software and why?

Gojko: My dad bought a Commodore 64 when I was 6 years old, and kind of he bought it for himself to tinker with, but to justify the thing (which was quite expensive back then), he told my mum that it was for me. So the computer was officially mine, but because he bought it for himself really, he didn’t buy a cassette unit, so I couldn’t play any games.

It took me a year to beg some games out of him, so for the first year the only thing I could do is sit next to him and type over listings from a book into stuff that made the computer make weird sounds or flash things on the screen.

Avanscoperta: Let’s start off with a classic: where do you see software development going?

Gojko: I don’t think it needs to go anywhere, it’s arrived! Software is now ruling the world, pretty much software developers now power most of the stuff on the planet.

Avanscoperta: What are the areas where you see the next development happening?

Gojko: For many teams I work with as a consultant, they kind of no longer have the big bottlenecks in development. We improved as a community how to develop and test software significantly over the last 10–15 years, so the stuff coming into the pipeline is where the #1 issue is for many teams at the moment.

We need to work on that problem, and then when that’s no longer a bottleneck I think it will go back to development.

Avanscoperta: Among all the books you wrote, two are particularly important: “Impact Mapping” and “Humans VS Computers”. Tell us something about these books and who should read them.

Gojko: “Impact mapping” is about a wonderful lightweight planning technique that helps teams talk to their stakeholders and figure out what to do next.

It helps with defining and tracking value, which is a big challenge for lots of people out there. I guess because of cheap scrum certificates, lots of teams tend to equate story points for value delivered, and track progress with burn-down charts and burn-up charts, but this is only showing effort spent, not value delivered.

Impact maps help to plug that gap, and connect the work that goes on within iterations to some important business goals. The book is a short intro to impact maps. 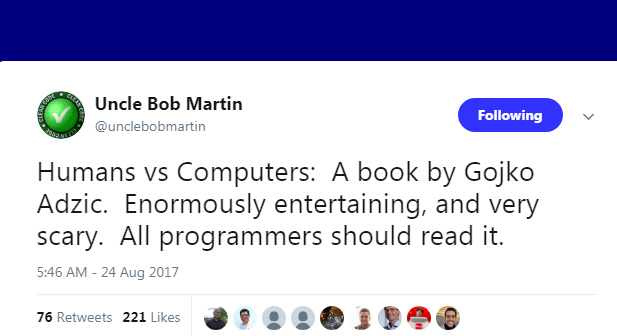 “Humans vs Computers” is a book about ordinary people caught between wrong assumptions and computer bugs. It’s a collection of stories, some hilarious and some quite scary, on how silly oversights when we build software can have serious impact on people’s lives.

Some of the hilarious examples include humans who are invisible to computers, how a default password once caused a zombie apocalypse, and why airlines sometimes give away free tickets. This is also a book on how to prevent, avoid and reduce the impact of such problems.

Avanscoperta: Among all names and job titles one comes across when working in software development, one could be particularly difficult to define… who is a product owner, and what does he or she do?

Gojko: Well hopefully drive a product towards success in the marketplace, while working with the team to define and build useful features.

Avanscoperta: There’s a lot of talking about user stories as well, and you also wrote a book titled “Fifty quick ideas to improve your user stories”. Can you expand a bit more on what user stories are and why they are a useful tool?

Gojko: User stories are a nice way of organising collaboration on requirements and specifications. Today, they are probably the most popular way to capture scope for delivery, and prepare for collaborative analysis.

The key idea behind stories was to break scope down into chunks useful to someone, rather than breaking delivery into chunks that are technically oriented, so that teams can deliver value sooner, and de-risk key usage scenarios early instead of building up a ton of infrastructure for months, only to learn about gaps and inconsistencies later on.

Avanscoperta: In which business sectors do you see the most challenging scenarios when it comes to adopting or switching to agile and why?

Gojko: For me, iterative delivery involving close customer collaboration is at the heart of what most people call “agile” today, and this kind of work is useful when teams work with a high degree of uncertainty, and need to deliver stuff that is important. It’s where the delivery or validating assumptions about the product or the market are critical for success.

When other things are critical, such as doing the work cheapest possible per hour of development, or employing 500 people to keep them busy, this approach doesn’t really help.

Avanscoperta: Now a bit more about your workshop. Gojko is the author of a training course titled “Impact Mapping Remote Workshop”.What shall one expect from this workshop, and why should I buy a ticket?

Gojko: The workshop is for people who want to get more out of the start of their development pipeline, get better product ideas, align stakeholders and link that to features or stories that can drive software delivery.

Come to learn how to ensure that things coming into your work stream are defined well, split to be small enough but valuable, and achieve the big benefits of adaptive planning and that you can expect from great user stories.

This is a seminar for a broad audience of anyone involved in iterative (agile/lean/scrum/kanban) delivery with user stories. Business sponsors will learn how to ensure their organisation benefits more from agile team delivery capability, and how to steer product management and delivery better to achieve strategic goals faster.

Analysts and Product owners will learn how to link between business sponsors and teams more effectively, how to select and prioritise stories and features to achieve better impacts.

Developers and testers will learn how to engage with business stakeholders and product owners to get better direction and focus delivery on things that really matter.

Avanscoperta: To close with a funny one… Is it true people often mistake Siberia with Serbia when it comes to interviewing you? 🙂

Gojko: Yes, the most often question I get after telling people where I’m from is “is it very cold there?”

Avanscoperta: Thank you very much for your time Gojko, it’s been a pleasure talking to you. Would you like to add something?

Check out the full list of our upcoming training courses: Avanscoperta Workshops.